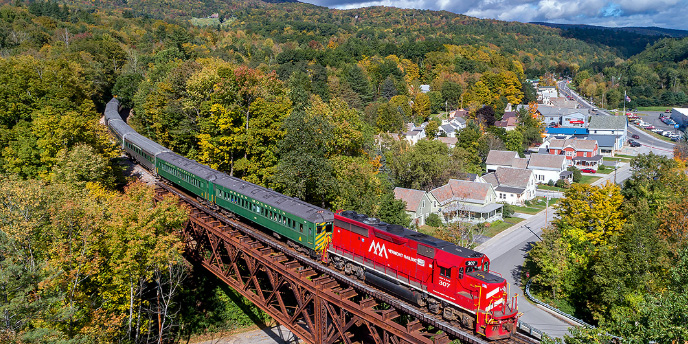 It is no secret that Vermont ranks again and again on the top of every list for seeing the best fall foliage in the country. With our rolling Green Mountains putting on their reds, yellows, oranges, and every shade in between; it truly is a stunning place to be. Want to explore the Fall Foliage in Ludlow, Vermont a bit differently this year? Go by Train!

Once per day from September 20-October 20, a train takes a two-hour round trip from Chester, Vermont to Ludlow, Vermont. The route takes you through historic Vermont Villages, the famed Green Mountains, over bridges, and through the woods! You’ll see fall foliage in a way that can’t be seen any other way.

There are so many phenomenal ways to explore Vermont Fall Foliage in Ludlow, Vermont. Take a look at more activites and adventures you can have by visiting our Things to Do page. Want more information on the unique train ride? Keep reading below.

The History of the Green Mountain Railroad

​       The Vermont Rail System’s newest innovation was made in early 2017 when they purchased two SD70m-2 Locomotives, No. 431 and No. 432. The highly efficient locomotives are the most modern in the VRS fleet. They have microprocessor-controlled features that will allow the VRS to move greater tonnage over its lines while using less fuel, ultimately making it more environmentally friendly.

Their plans include extended passenger service to Burlington and numerous infrastructure upgrades in the future.  With the same dedication to customer service it has had since its inception, the Vermont Rail System looks forward to expanding its customer base while they continue “Serving America’s Industry with Pride.”

Read more about the history of the Green Mountain Railroad here.

Facebook Instagram Tripadvisor
First visit to the Timber Inn. I wish I stayed here years ago. Room was recently renovated and was very nice and super clean. Wooden ceiling with a large beam added a rustic charm. The owner is very nice and welcoming. Walking distance to Sams Steakhouse and Mr Darceys restaurant.
Trip AdvisorDan H.
We highly recommend the Timber Inn Motel! From check in through check out the entire experience was wonderful. The rooms are very spacious, clean and comfortable. After staying in various motels throughout New England this has been by far the best. We will definitely be back when traveling this way again!
FacebookBarb C.
I've been coming here for a few years, and will continue to do so! Clean rooms, and great friendly owners that make your stay easy.
FacebookRich B.
Nice room, great location close to Okemo, very friendly and helpful owners. Good WiFi., nice hot tub.
FacebookMelody B.
Previous
Next