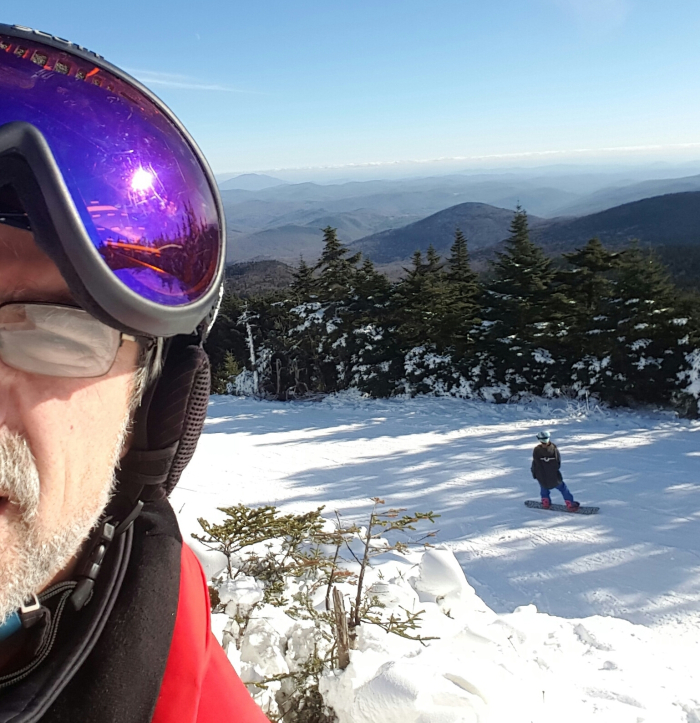 Skiers and riders jonesing for the white can thank Okemo for serving up early holiday blessings. The Ludlow, VT resort expects to load chairlifts beginning Tues., Nov. 24. Delayed by warm weather — the new norm?– Big O’s snowmakers have logged enough low mercury time over the past week to lay down a slippery surface on both halves of the World Cup trail and more. And so begins the 2015-16 winter sports season.

Locals have eyed the mountain with envy — and a bit of disappointment — this week. In past years, Okemo welcomed customers as soon as it had blasted a skiable loop off the summit to its mid-mountain Glades Peak chair. It wasn’t much, but early sliders could go out to play on snow before eating turkey. Most years, this entailed a bus ride from the base area up the road to the old Northstar terminal. And, until the guns ‘n hoses crew could blow snow all the way down to the base area, we got to ride the lift back down to the bus. But skiing is skiing however one gets it.

Since Okemo’s significant snow gun upgrade for 2013-14, the folks on the hill have spoiled us with top-to-bottom skiing right from the get-go.

Perhaps now management needs to re-think this strategy. As 2015 is going down as the warmest year on Earth (and no end in sight), the goal of opening with top-to-bottom snow cover might be one for the history books. We’ve had it good for two consecutive years. But, skiers and riders showing up on opening day this week can’t ride a white carpet all of the way down to the base. Management says some walking might be required.

Killington World Cup: Where to Stay

Facebook Instagram Tripadvisor
First visit to the Timber Inn. I wish I stayed here years ago. Room was recently renovated and was very nice and super clean. Wooden ceiling with a large beam added a rustic charm. The owner is very nice and welcoming. Walking distance to Sams Steakhouse and Mr Darceys restaurant.
Trip AdvisorDan H.
We highly recommend the Timber Inn Motel! From check in through check out the entire experience was wonderful. The rooms are very spacious, clean and comfortable. After staying in various motels throughout New England this has been by far the best. We will definitely be back when traveling this way again!
FacebookBarb C.
I've been coming here for a few years, and will continue to do so! Clean rooms, and great friendly owners that make your stay easy.
FacebookRich B.
Nice room, great location close to Okemo, very friendly and helpful owners. Good WiFi., nice hot tub.
FacebookMelody B.
Previous
Next